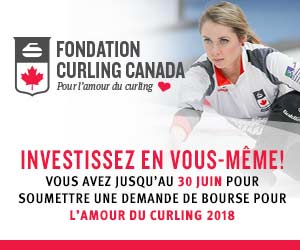 Young curlers from across the country will once again be able to further their academic and athletic ambitions, thanks to the Curling Canada Foundation’s For the Love of Curling Scholarship program.

Applications are now being accepted for the 2018 For the Love of Curling Scholarships, which are funded through the generous support of the Canadian curling community, and have been raised in value from $1,000 to $2,500.

A total of 10 scholarships will be awarded to male and female curlers who best demonstrate athletic and academic prowess as well as community leadership.

“The For the Love of Curling scholarship announcement is an annual highlight for Curling Canada — even more so this year with the increased monetary value of the scholarships,” said Resby Coutts, Chair of Curling Canada’s Board of Governors. “That increase reflects Curling Canada’s commitment to developing the next generation of curling champions, on and off the ice.”

Two-time World Junior Women’s champions (2018, 2016) Kristin Clarke and Karlee Burgess, as well as current World Junior Men’s champions Tyler Tardi and Sterling Middleton, are all past recipients of the For the Love of Curling Scholarships. All four received their scholarship in 2016.

Additionally, Burgess is on the selection committee to decide this year’s recipients.

All of the 2018 scholarships will be awarded to deserving young athletes from across Canada to help post-secondary athletes cover some of their education and curling costs.

Emphasis will be placed on athletes who have competed at the provincial/territorial level or higher; who have maintained a good level of academic standing; while showing a commitment to curling through their involvement in coaching, instructing and/or volunteer activities. Athletes must be under the age of 23 as of Dec. 31, 2018, and not have received the For the Love of CurlingScholarship previously.

The application process runs from May 1 to June 30, 2018. Scholarships will be awarded in August.

For more information or to apply, visit online www.curling.ca/scholarship2018.