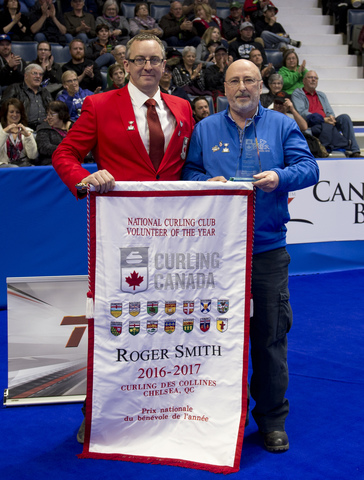 The requirements for the Volunteer of the Year award are many and varied, hinging on the contributions of the candidate during the previous curling season. Roger Smith received the award during a ceremony that took place before the beginning of the Brier final on Sunday, March 11th.

Building a new curling centre from the ground up is no easy task, but it is one that Smith jumped on nonetheless with enthusiasm and zeal, to fill the need for such structures in Chelsea, Québec. Des Collines itself exists since 2005 and started off with 90 members but never had its own premises; it had its beginnings in a hockey arena and subsequently relocated to a curling club in Ottawa in 2014.

The dream of independent space came true in February 2016 when the Québec government awarded $1.7 million for the construction of a new four-sheet curling centre.

Smith developed the grant applications and the business plan himself, and he was able to fundraise over $400,000, while also negotiating additional financing strategies with several institutions.

Yet the money was only half the battle: Roger also had to identify a location for the new curling centre, which he found in Chelsea.

Curling Des Collines is now in its final phase of construction and should be opening its doors to the public in time for the 2018-2019 curling season, with the ability to welcome over 600 members.