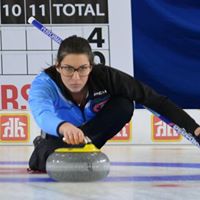 Earlier this week, Camille Boisvert got a big-picture perspective of her trip to Victoria  2017 Canadian Junior Curling Championships, presented by Ambrosia Apples.

The 21-year-old skip and her Quebec teammates from Lévis took advantage of a break in their busy schedule to go on a charter floatplane tour of Victoria and southern Vancouver Island.

“It was really fun; it was very pretty and it was like a team meeting, too,” said Boisvert with a smile. “It was very cool.”

Sometimes, as Boisvert, vice-skip Laura Guénard, second Émilia Gagné, lead Isabelle Thiboutot and coach Michel Blais are experiencing this week, it’s not always about the destination; the journey counts for something, too.

Undoubtedly, seeing the sights outside of the Archie Browning Sports Sports Centre has helped the Quebec team relax in a high-pressure competition, and perhaps that played a role on Thursday morning as Boisvert made a crucial draw to score the winning point in the 11th end of a championship showdown with Saskatchewan’s Kaitlyn Jones of Regina.

The dramatic 8-7 win put Quebec at 5-3, tied for the third and final playoff position with Northern Ontario’s Krysta Burns (Sudbury).

Saskatchewan, meanwhile, dropped to 4-4 and in need of some help to reach the weekend playoffs.

“Throwing that last shot? I was pretty nervous,” admitted Boisvert with a laugh. “Of course, the cold temperature out here didn’t help. I was shaking the whole game. I was nervous, too, but I kept my calm and just threw it. I’m confident with our sweepers, I let them brush it and it happened.”

That came on the heels of a marvellous shot by Jones in the 10th — an angle-runback to remove a Quebec stone from the top of the button and score a game-tying single.

“She made the perfect shot in the 10th end,” said Boisvert, who also skipped Quebec at the 2014 Canadian Juniors in Liverpool, N.S. “We just said that we have to control only the things we can control; obviously, we couldn’t control her shot. She made it perfect, and congrats to her. But we said we did everything right in the 10th end; just come back and do the same thing, and it was a perfect extra end. We had a good attitude.”

Northern Ontario kept its playoff hopes alive with a 9-4 win over Alberta’s Kristen Streifel (Edmonton), stealing one in the fourth and three more in the fifth. Alberta, 6-2, remained alone in second place.

On top of the women’s championship round standings is Ontario’s Hailey Armstrong (Ottawa), who improved to 8-0 and clinched a playoff spot in the process with a 5-4 extra-end win over Prince Edward Island’s Lauren Lenentine (4-4; Cornwall).

Men’s championship round teams carried with them only their record against their fellow championship-round qualifiers into the second phase of the event; that was the result of having two uneven pools due to the Yukon not sending a men’s team.

In the women’s championship round, the teams’ overall records still stand because the two pools were even in number.

B.C. is now assured of a tiebreaker berth thanks to the victory.

The teams that didn’t advance to the championship round are playing in a seeding round to determine final rankings.

In women’s seeding round play, Zoey Walsh of the Northwest Territories (Hay River) scored two in the 10th end for a 9-8 win over Nunavut’s Sadie Pinksen (Iqaluit).

Play continues at the 2017 Canadian Juniors on Thursday with draws at 2 p.m. and 7 p.m. (all times Pacific).

The top three teams at the conclusion of the championship rounds will go into the playoffs. The second- and third-place teams will meet in the semifinals on Saturday (women art 1:30 p.m.; men at 5:30 p.m. All times Pacific), with the winners moving into the championship finals against the first-place teams. The women’s gold-medal game is at 9 a.m., followed by the men’s gold-medal game at 1:30 p.m.

The non-playoff teams will compete in a mixed doubles tournament Saturday and Sunday.

TSN/RDS2, the official broadcaster of Curling Canada’s Season of Champions, will provide live and exclusive coverage of the womenʼs and menʼs semifinals on Saturday, Jan. 28, and finals onSunday, Jan. 29. The same games also will be streamed live in the U.S. on ESPN3.

This story will be posted in French as soon as possible at http://www.curling.ca/2017juniors/?lang=fr

The full scoreboard can be viewed at http://www.curling.ca/scoreboard/